Top 10 Known Musicians Who Play Martin Guitar ~ In the year 1833, C.F. Martin & Company, an American guitar company was established by Christian Frederick Martin. The company has grown popular in manufacturing high-quality acoustic and flat top guitars. The well-known guitar company also built its very own guitar museum, which you can visit to see over 170 martin guitars exhibited inside personally.

Listed below are the top 10 known famous music artists who own a Martin guitar:

In the late 50s and early 60s, The Kingston Trio introduced the taste of American folk music in the country. The trio, who originated from San Francisco’s North Beach Club, earned an overwhelming amount of sales and unimaginable fame that influences the music industry.

Known for his successful albums Red Headed Stranger and Shotgun Willie, Nelson is a prominent personality in the music industry of American country music. Apart from being a musician, Willie Nelson is also a writer, poet, social activist, and actor. He was cast in over 30 movies and wrote numerous books.

Laurence Juber is known as the lead guitarist of the band Wings produced by the Beatle’s member Paul McCartney. He is a two-time Grammy awardee also a world-renowned guitar master, songwriter, and arranger who master in blending folk, jazz, and pop music.

Maroon 5 Member Adam, James, and Jesse began playing music during their junior high years. Nirvana and Pearl Jam inspired their music. James Valentine stated that he has no difficulty in recommending a great guitar like Martin guitar. The band favored Martin guitar is GPCPA1 Plus.

Scott and Seth Avett, also known as Avett Brothers, have strengthened the great brotherly harmony of music in a classic brother act just like the Beach Boys and Bee Gees. Avett Brothers state that being a Martin guitar company ambassador changed their life as a working musician. The Avett Brother’s favored Martin guitar is D-35 Seth Avett.

Cody Simpson began learning to play the guitar at the age of seven. He got motivated by his father’s singing and guitar playing. He then started composing songs and began uploading his performances on YouTube. He loves making cover songs of Justin Timberlake, Jason Mraz, and Jack Johnson.  Cody Simpson’s favored Martin guitars are D-35 Johnny Cash and OMJM John Mayer.

Colbie Caillat is known for her songs, Bubbly and Realize. She said that the first guitar she ever played in her dad’s 1968 Martin. Her dad’s 1968 Martin was used in Fleetwood Mac’s album recording.  She also said that Martin guitars provide a beautiful crisp sound for her performance that she liked to play on her albums and live performances.

The Scottish singer-songwriter Lewis Capaldi also uses a Martin guitar on his shows. He started gaining popularity in 2017. Lewis Capaldi’s Someone You Loved has aced the UK Singles Chart for seven weeks in 2019 and reached number one in US Billboard and grew popular in other 29 countries globally.

In conclusion, there is no doubt that C.F. Martin & Company creates high-quality guitars that a lot of known musicians, especially acoustic performers from the past till the present loves to play. Music artists very much favor these guitars because of its excellent sound quality and stability. The brand makes sure that their guitar has a suitable coat to preserve it for many years but will still hold the guitar’s tone.

What Guitars Do Country Singers Use?

Do Guitars Get Better With Age? 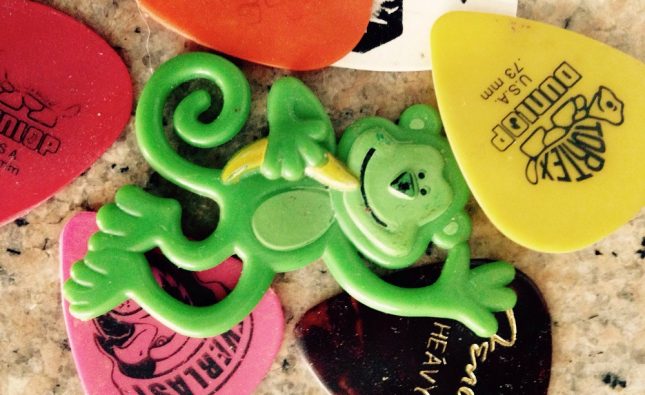 What Is The Best Material For A Guitar Pick?